Fact boxes on the mRNA vaccine against COVID-19

The Harding Center for Risk Literacy collaborates with a number of organizations to develop fact boxes on health topics that are targeted at the general population and doctors alike. The fact boxes are intended to enable consumers to understand the advantages and disadvantages of certain medical measures so they can decide whether or not to consent to them.

Applying the developments and findings of the Harding Center's research on transparent communication of risks, we strive to present the best available evidence on potential benefits and harms of various medical measures and on health topics by creating fact boxes in a graphically appealing format.

More generally, we scientifically evaluate the effectiveness of fact boxes in terms of how they improve the consumers’ understanding of harms and benefits of health behaviors and treatments, and how they affect health decisions. In addition, we examine which other formats could be suitable for the aggregation and presentation of medical evidence and how best to communicate information about the quality and uncertainty of such evidence.

In 2014 we began developing fact boxes in cooperation with the AOK, one of the largest health insurance providers in Germany. The fact boxes are available as decision-making tools on the AOK website (website only available in German).

This project builds on the research expertise of the Harding Center and the capacity of the Bertelsmann Stiftung to disseminate decision tools broadly to the public through their website "Weisse Liste" (website only available in German).

The collaboration with GWQ ServicePlus AG (website only available in German) aims at strengthening the health literacy of people insured in the statutory health insurances so that they can make better decisions regarding their health. For this matter, we developed fact boxes on various topics.

In cooperation with colleagues from the Robert Koch Institute (RKI), we have created fact boxes on COVID-19 vaccinations. 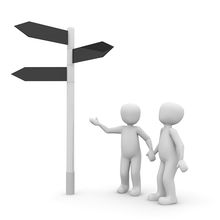 Medical questions often have no black-and-white answers. For this reason, transparent information is crucial – as is the courage to make informed decisions for oneself.

What are fact boxes?

Fact boxes communicate the best available evidence about a specific topic in an easily understandable manner. The most important pros and cons are contrasted with each other in a tabular format, thus allowing even people with no medical or statistical background to make competent decisions.

The simple tabular format was originally developed by Eddy in the form of a balance sheet to illustrate the benefits and harms of colorectal cancer screening. Lisa Schwartz and Steven Woloshin subsequently adopted the idea in their drug fact boxes to improve direct-to-consumer drug advertisements. Since 2009, the work at the Harding Center for Risk Literacy builds on this work in order to disseminate the idea of fact boxes focusing on health topics.

Several studies show that fact boxes were effective tools for informing the general public about harms and benefits of medical treatments.

Fact boxes are based on the best scientific evidence currently available. Their development adheres to the methods of evidence-based medicine according to Sackett et al. (1996) and Kunz et al. (2007) as well as the findings of the guideline evidence-based health information by Lühnen et al. (2017). Each fact box is reviewed several times by Harding Center team members and finalized in collaboration with an editor and the Harding Center's head research scientist.

In our methods paper, we describe the scientific principles and general methodological approach used by Harding Center staff in the creation of fact boxes. In addition to providing a detailed description of the scientific principles, we summarize the steps involved in creating the fact boxes (e.g., evidence selection, outcome selection) and provide a comprehensive explanation of the Harding Center's collaborating partners, sponsors, and funders.

The method paper for the development of fact boxes is under continuous revision in order to meet the Harding Center's own quality requirements and to take into account the latest developments in evidence-based medicine.

Comments and suggestions are welcome and can be addressed to hardingcenter@fgw-brandenburg.de.

All fact boxes of the Harding Center for Risk Literacy and accompanying materials are licensed under a Creative Commons BY-NC-ND 4.0 license (attribution - non-commercial - no derivatives - 4.0 international).