This fact box will help you to weigh the benefits and harms of the influenza vaccination for healthy adults. The information and numbers in this fact box represent no final evaluation. They are based on the best scientific evidence currently available.

This fact box was developed by the Harding Center for Risk Literacy.

What is influenza (flu)?

Influenza is a disease caused by an influenza virus. The accompanying symptoms are high fever, headache, back pain, and aching limbs, as well as cough, runny nose, sore throat, and hoarseness.

People often talk about having influenza without being tested for it. Influenza-like diseases include influenza and other common respiratory diseases. Their symptoms (high fever, cough) are so similar to those of influenza that healthcare professionals cannot distinguish the disease from influenza without laboratory testing.

Influenza viruses are transmitted predominantly by virus-containing droplets. These are produced in particular through sneezing or coughing, and can reach the mucous membranes of the respiratory tract of susceptible people over a short distance. Contact with surfaces or hands contaminated with virus-containing fluids (saliva, sputum) can also lead to infection (e.g. via door handles or handshakes).

What is an influenza vaccination?

For an influenza vaccination, inactive or weakened influenza viruses are injected into the muscle or under the skin. The immune system then forms antibodies for this particular virus. If a person subsequently comes into contact with an active influenza virus of the same type, the immune system can react more quickly to the virus and combat it [2].

Healthy adults who work in public or medical facilities or with people at risk (older people, people with chronic illnesses, pregnant women) [1].

When should the vaccination be carried out?

What are alternative options for prevention?

Adherence to hygienic measures such as frequent washing of hands (particularly before and after contact with risk groups) and disinfection of potentially contaminated surfaces and objects (e.g. door handles) may prevent infections. In addition, keeping away from people with influenza-like symptoms and measures that promote the body’s own defenses (e.g. balanced diet, exercise) may reduce the risk of infection [1].

Fact box influenza (flu) vaccination for adults
What does the fact box show?

The fact box compares the benefits and harms of the influenza vaccination with a placebo vaccination or no vaccination for healthy adults between 16 and 65 years of age.

The table may be read as follows:

What other aspects should be considered?

The variation in the effectiveness of the influenza vaccination depends directly on where and how severely different types of influenza viruses spread, as well as on whether the administered vaccine matches the type of viruses during the respective flu season. Since different viruses are more prevalent each year, the benefits of vaccination against the influenza virus are not accurately predictable for that year or for a new virus.

Common colds cannot be prevented by an influenza vaccination.

Do the results provide proof (evidence) for the benefits and harms of the vaccination?

The results are of overall low quality. It is very likely that further research will change the results on vaccination protection in connection with the seasonal spread of the flu virus and the vaccination-related side effects.

Information for the fact boxes were obtained from the following sources:

Documentation on how the numbers in the fact box were determined is available on request. 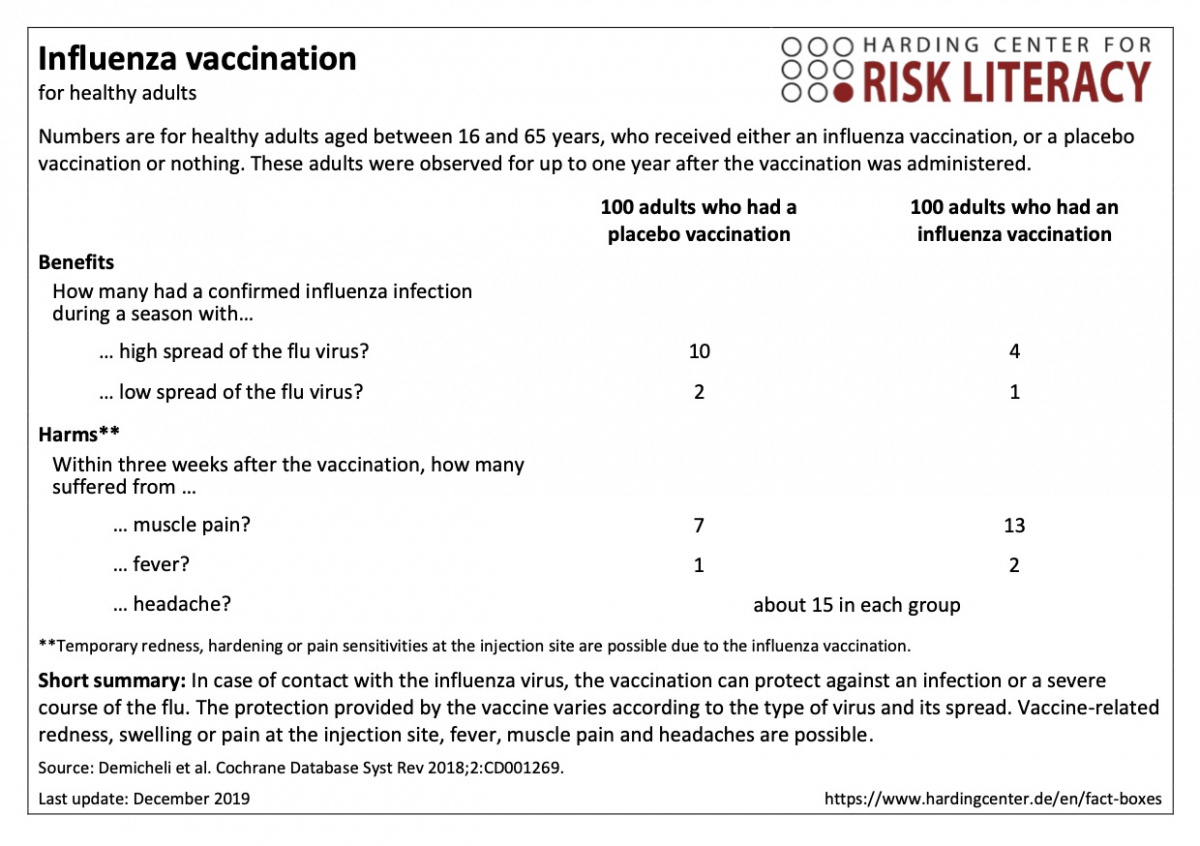 The idea of fact boxes was developed by Lisa Schwartz and Steven Woloshin. In several studies they demonstrated that fact boxes were effective tools for informing the general public about benefits and harms of medical interventions. Read more in the overview.

Terms of use: All fact boxes of the Harding Center for Risk Literacy and accompanying materials are licensed under a Creative Commons BY-NC-ND 4.0 license (attribution - non-commercial - no derivatives - 4.0 international).